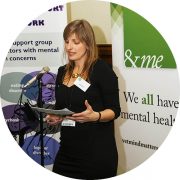 We and the Doctors’ Support Network (DSN) are pleased to report positive progress since the launch in January of their joint anti-stigma mental health campaign.

The &me campaign (#AndMe), which was launched at the House of Commons in January, has taken a new approach to the de-stigmatisation of mental ill-health within the healthcare professions.

Although health professional bodies advise professionals to value their own wellbeing and seek appropriate help if unwell, there has been an absence of senior professionals who have felt able to say ‘been there myself’.

With the addition of Dr Cathy Wield in August, there are now seven ambassadors for the &me campaign, and all of their stories can be read on our website:

Lizzie Lockett, Director of the Mind Matters Initiative, said: “Over the past eight months we have seen an incredible level of support for our &me ambassadors. Our Facebook post about Rob Pettitt, for example, reached nearly 25,000 people, many of whom posted stories about Rob helping them navigate veterinary school and better understand their own mental health issues. These kind of role models really do help reduce stigma, and we thank every one of our ambassadors for having the courage to share their own experiences with mental health.”

Louise Freeman, Vice-Chair of the Doctors’ Support Network, said: “The &me campaign has really shown how the medical professions can work together when it comes to mental health. Medical professionals face many of the same challenges, and we needn’t face them alone – instead we can work as one to tackle stigma and speak openly about mental health issues. And it’s not just in the UK that health professionals can feel as if they are ‘not allowed’ to experience mental health problems. As a direct result of the &me campaign, health professionals from around the world including Australia and the U.S. have been in contact with DSN to confirm that they have similar issues within their local health culture.”

The campaign is still interested in hearing from not only doctors and veterinary surgeons but also nurses, veterinary nurses, dentists, pharmacists and other healthcare professionals who want to open up about their experiences of mental ill health. To participate in the campaign, please email Dr Louise Freeman on vicechair@dsn.org.uk.

On social media tweets about the campaign are sent from @vetmindmatters and @DocSupportNet Twitter accounts using the hashtag #AndMe.

https://vetmindmatters.org/wp-content/uploads/2017/09/Untitled-1.jpg 600 600 MMI Press Office https://vetmindmatters.org/wp-content/uploads/2015/10/mm-sphere-logo.png MMI Press Office2017-09-04 17:19:212017-09-05 08:21:24Great results reported from mental health campaign
Privacy notice: This site uses cookies, which we use to collect anonymised statistical data to improve your experience, and not for marketing purposes. If you continue we'll assume you are happy to receive them. Read our cookie policy
Scroll to top